Human Security - struggle for many years - violence against women, from domestic to work force, to places of conflict. succeeded in CEDAW - a name to what we were facing, gender based violence, and make visible the statistics, involving millions, from time of peace to war. declaration defined violence, any action that brings harm based on gender. Suggests what needs to be done - early 90's. Later faced with changes in International scene, military action no longer prominent, a secondary position then the  downfall of soviet union, think more seriously about what does it mean for individuals and communities to be secure. Human security paradgm became a focus. Thought of life situations that make you secure or not. Trying to defne, but then 9/11. Human security went to the side. In recent years think of human security think of it as challenge for human race. Women have diverse societies, and backgrounds. Look at women's movements - we need to have a vision we want to live in, and we may need to define the definition, human security, cohesive approach, of being human, and kinds of relationships we want to have.

Our time to look at - women are the right community. They are the ones that are targeted, suffer the most. Look at larger picture of world we want, what kinds of strategies, and a secure world for all of us. 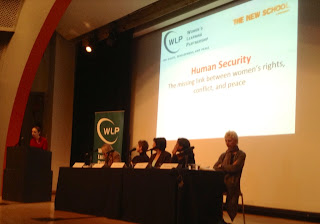 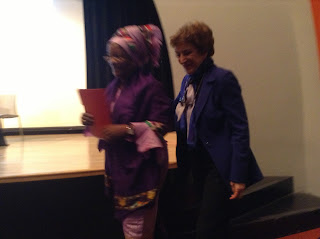 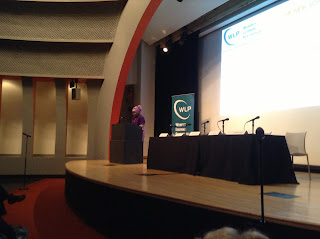 What is security, and whose security?

Rape as a weapon of war - part of culture. what are barriers to gender justice. Sexual violence victims must prove they did not encourage such acts.

Documentaton programs vary, and play a growing imporant role. For UN organizations there is a need to standardize the documentation. Use of NGO documents not recognized by ICC. Involves 20% of the world.

Transitions going on Arab states mainly. New type of violence against women - political violence, conservatives, regious fundamentalists, by election (democaracy). They are now targeting women, criminalization of women walking unveiled. Woking for soial justice, Most serious case is Syria. Dicatorships not defending human rights, or justice. ICC, is not implemented in many cases. Most of countires not state parties. Countires at UN not supporting UN being involved in Syria. Procedures on a national level, can't take to ICC. Penal codes not up to standard, No interest in taking the links between the local standards up to international standards. Rape of Egyptian women, without interference from police. Inside Syria, camps,  Lebanon, trafficking, child marriage. Thousands leaving. Food and provisions in thecamps  not even up to daily standards of UN.

Women in Gaza, violence, attention to GBV, not even recognized by others, including Palestinian authorities.

No steps in Libya, Palestine, Egypts. Need to make the link with human security and the daily life of women. This type of protection not only war conflicted countries but other fragile states.

CSW, not being able to come up with agreed conclusions. Criticism and attack on 1325, allowing interference of SC in civil society. Many excuses to prevent implementation of resolutions, plans of actions etc that could help women.  No serious steps to make it work for women, in camps or daily lives. In Jordon, Plan of Action - land mines, and security personel. Syrian refugees in Jordon, providing documentation, social services. We can not just argue,p we need to take work to grass roots level. Needs a lot of support. Security is daily life of women who are living in transitional situations.

Human security encomapsses many things, human security in practise. Living daily life - many forms of violence, some cultures embedded in violence. VAW embeded in the social norms. Violence against women need long term strategies - gender norms, Bunder of values, culture, norms that are fundamentally discriminatory. In instituttions, in the way programs are designed, 2 strategies, building the power of individuals to sustain actthis. To change these norms. Change in a male south african trade union given as an example. Problems not discussed. Break silence. Need for space, to discuss for example alternative structure of silence on gender violence. Bring more women into leadership in the Union, leaders accoupntable. Confronting leaders with sexual exploitation. Example of workers making change. Coaltion building, build selfesteem, research by AWID, MDG fund, research on womrn's rights  organizations, they have got in fairly sht time frame, thinking differently about GBV. Shaped policy. Rerightwhi are miniscule, so strategy has been effective. Wiki leaks research, While we have created norms that support changing violence, what keeps current in play, Conforming to majoirty norms. Every one stays in the box.

Vision - International League for Peace - as releavnt today as was then, root causes of conflict so can prevent it. Look at nature of gender relations we have, how does it play out. The Truman Show - movie. What it is to be like to be masculine. Masculine look, grafting on to society, masculiniazation of females. construct that is being done to us. Empahsis on equality, grafting male on to female, concepts of feminity and masuliinity. Backlash of males on masculinity. deconstruct masculinty to take away the violence. and power. Sucked into a construct. When we look at stats, VAW, so many more women killed in domestic violence thant in twin towers. War on male perpetrators? look at the ways the masculinity constrcuted. Lies in political economy. Relations in a family, who earns the most money. Imbalance in home work balance. Do not have a gun in the house, it will be the man who owns the gun. 94% of women in Macidonia were threatened. Arms trade - emploment, health care, social welffare reduced

Defense budget in UK, Missiles out of date, lost investments, cut jobs and welfare benefits, Women made up the difference. Closing of shelters, 2 deaths every week in the UK because of  this. Economic and politics. Crisisis in UN hypocrasy at the UN. Those states will speak out agaist arms trade next week. Play on all elements, together. Work together, legally, morally necessary,

Deconstrctions of male and female. To be a man have to be in charge.

Hypocrasy in UN, Arms Trade treaty - Pakistan and Holy See want to get rid of gender, talking of hypocracies, part of own countires. How they are connected. Murder of woman - extraordinary out pouring. testimonies from everyone.Fron India - rep. from commission, but not imprelented. Death sentence for raptist, which women not in favour of. Lenses get distored.

Standards in the Rome statute they are useful in more than open conflict.

Key note speaker -women face discriminationi, need to be mainstreamed in all aspects of life.
GBV is an absolutie disregard for women's human rights, if no respect for women in time of peace, not repected in times of war.

Consequencws of rape, the whole community victimized. Not just few rogue soldiers, but deliberate war. Series of resolutions, 1325, foundation for her work, linking women's experiene to peace and security.
1820 recognize sexual attack on women and girls as deliberate aspect of war. Naming and shaming of countries. No longer is it seen as colateral, impunity, right  of war, but a HR violation.

We need national machinery. Dont have resources at local level.  UN coordinating network that she chairs. All bring expertise, and ensure UN can lead.

Impuity must end, stigma for the victim. No hiding place for perpetrators. Ending impunity, end barriers, like paying for medical costs  and food costs for perpetrators in prison. Legal costs must be paid by victims. post conflict governemtns must make dearmament a priority. Let go of old ways of thinking, liek using bodies of women. Governemtns must make use of change of attitudes of everyone. Larger attack root causes of sexual violence in war. Access to education, represented in politics, represented in justice system. crucial to be there for the peace process. women must be involved to capture visison of SC 1325. Women's rights are human rights. we can end sexual violence in conflict. Met with Sierra Leone. example in them and in their community. These women not only survived but achieved much. Women are valued members of society. Much more needs to be done, drums are beating. Challenge governments, without security there can be no peace, without peace there can be no development.\Humanity shift - time is now.

Intro of documentary. Instability in one region affects others.

Showing of film "Because Our Cause".. The film is on the post Arab Spring backlash against women's rights defenders in the middle ears/north Africa, developments that have serious implications for establishing democracies in the region.  This is an excellent film and I look forward to showing it in Winnipeg.
Followed by panel, who commented on the film, Lina Abou Habib, Farah Karimi, Farida Naqash.
Back behind what we were, great financial resources they have, no experience in building democracy. Promises from Islamists, but haven't delivered on any of them.

All were aware of what happened in Iran. if a change happens, can be for the worse. fundamentalist are better organized, more resources, and targeted in a special way.previous regime, moved, so free space, so who occupies free space. not organized. What are we not doing?  The cause is just. It is very serious,  conservatism, don't want to open agreements, that position. Very week, and we will lose. Defragmentng of movement doesn't help. How are we going to get act together?

To get to culture of peace, establih peace on the ground. Citizens helpless. Dig where you stand, Arab autumn. To consider balance of power, most plans are gender blind. Charity blind. Increasing poverty, 3 of 4 of unemployed are women  these masses elected Islamists who have  resources, we were blind,  state  withdrew, Islamists came. Rights  of women during dictatorship were debated, Islamists eliminated quota system and family law changed.  They don't consider women as having human rights. To change political structure, and social justice. Antiglobalization Movement. Democracy participatory governments. Anti arms industry, globalization of people. Women movement have to be part of this system. Nuclear arms, insecurity in Mediterranean  and Mid East. Would increase budgets for social and health needs.alternative to poverty Noam Chomsky local and international action. Women, not kings are the future of the world,

Battle going on for resources, land grabbing water grabbing, private led development, emerging powers, multipowers, lost of challenges. See  it at CSW. Become change we want, combine efforts. Have debate.
Splitnered, but all come together. need to come together.

This was an excellent session, and i look forward to shaing the documentary in Winnipeg.