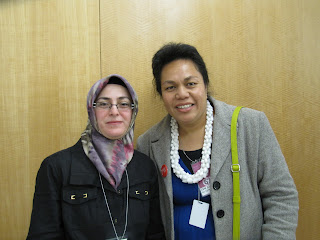 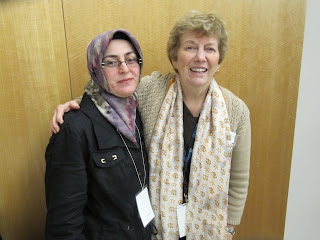 Nazila Isgandarova and Mary Scott at the session sponsored by NCWC

Violence Against Women in the Name of God: A Parallel Event of National Council of Women of Canada at the 57th session at the Commission on the Status of Women in New York

I am honoured by the Canadian Council of Muslim Women and National Council of Women of Canada to be one of the members of the Canadian delegation at the 57th session of the Commission on the Status of Women. A large number of government representatives, senior officials, delegations from the NGOs, and experts have come from all around the world to New York to discuss and assess the status of the CSW’s work for gender equality and the empowerment of women. The representatives of the governments and members of the parliaments also share their experiences and good practices. However, what is also remarkable is the participation of the NGOs, who question their respected governments’ legislations and practices that push them further to achieve the new and improved legal, socio-economic and political equality of women that drastically help to eliminate all forms of violence against women.

Together with Mary Scott, the past president of NCWC, I organized a parallel event at Taiwan Representative Centre in New York on March 5, 2013. The topic of the event was “Violence against Women in the Name of God: Who Interprets the Sacred Texts?” The main idea of the event was that many perpetrators abuse the religion, culture, and tradition to justify all forms of violence against women and girls around the world. I reported that the sacred texts are even used for rape of women and girls during the wars. Some of the examples of this kind of violence against women are the Khojali genocide in 1992, the Rwanda genocide, the recent massive attacks on women and girls in Burma in 2012, etc.

The participants were encouraged to ask these questions when they develop a personal relationship with the sacred texts: How do my reading of the sacred text liberate me? How do I feel when I read this way? When I am vulnerable, does the sacred text recognize my vulnerability?

I have highlighted that the increase of domestic violence in Muslim countries should be examined not by analyzing socioeconomic and political factors but also examining misreadings of the Qur’an. Many Muslims make the patriarchal interpretations and translations of the Quran by male Muslim scholars as the main authority of Islam to impose rules and authorize certain practices against women, while failing to recognize the authority of women to read the Qur’an. As a result, male religious authority in Islam for centuries developed a mind-set that abused the sacred text, the prophetic examples and reason to the advantage of patriarchal society and to the disadvantage of women, and many other oppressed population. Leila Ahmed mentions that the readings of male religious authority, therefore, established “fundamentally different Islams” that arise in orthodox readings.  Asma Barlas points that it is imperative to challenge the authoritarian and patriarchal readings of Islam that are profoundly affecting the lives and future of Muslim women. The general attitude of Muslims to read the patriarchal exegesis of the Qur’an unquestioningly instead of accepting the basic fact that the Qur’an’s interpretations reflect their authors’s socioeconomic positions, political ideologies, sectarian loyalties, etc. Failing to reading the Qur’an itself first as a main source of authority, therefore, becomes one of the sources for inequality and discrimination among Muslims. If Muslims read the Qur’an with critical thinking they will witness that inequality and discrimination against women “derive not from the teachings of the Qur’ān but from the secondary religious texts, the Tafsīr (Qur’ānic exegesis) and the Ahādith (s. hadīth)…” as Asma Barlas points out.

It is disappointing that in 21st century we are still questioning women’s right to read the sacred texts and be included as a religious authority.  However, in postmodernist eta, Muslim women are deprived of their basic rights to define Islam for themselves. Nonetheless, the majority of women want to improve their situations by calling for a new interpretation of the sacred texts while respecting religious, cultural, and national identities and want to express their concerns of authority or power of interpreting the sacred texts and how it impacts the lives of women.

The works of Muslim women scholars, such as Fatima Mernissi, Amina Wadud, Asma Barlas, etc., encourage Muslim men and women to develop a methodology to read the Qur’an that allows its own transformation and ongoing interpretation, critical questioning, open to women, class, and other oppressed and vulnerable populations. One of such methodologies was developed by Asma Barlas, for instance, who invites examining the Qur’an and its multiple readings, both by traditional and egalitarian authors, from the principles of Divine Unity, Justness, and Incomparability. First, the principle of God’s Unity (Tawhīd) symbolizes the idea of God’s Indivisibility of God’s Sovereignty. It implies that no male (or popular) theory of the Qur’an can claim God’s to be an extension of God’s Rule/Sovereignty. Second, God is not Zalim (the one who inflicts injustice) and God “never does any zulm [injustice] to anybody.” Therefore, God’s Book, the Quran cannot preach injustice, inequality, misogyny, and discrimination based on race, sex, and class. Therefore, any Qur’ānic interpretation and translation that support for women’s subordination to men and is misogynist only reflect its author’s mind-set shaped by the historical context of his/her time. Thus, Asma Barlas points out, the Qur’an must then “be reexamined in light of a more ecumenical definition of Zulm that coheres with the totality of the Qur’ān’s teachings about the equality of the sexes.” Third, Islam teaches that God is Incomparable, hence Unrepresentable. The Qur’ān rejects God’s sexualization/engenderment, especially imagining God as Father (male), which shows the Qur’an egalitarian position and its rejection of patriarchy. Therefore, any opinion that preaches God’s special affinity with males or endorses more power of men over women is against the true teachings of the Qur’an.

At the end of the workshop, the participants shared their thoughts, experiences that brought awareness of the power of interpreting the sacred texts and importance for a new liberating translation and interpretation of the sacred texts in all religions. Such an approach to develop moral-social principles will allow not only to “keep the Qur’an alive,” as Amina Wadud mentions, but also any sacred text applicable to the present time.