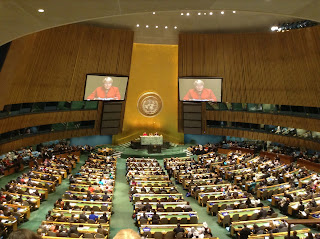 Well, the 57th meeting of the Commission on the Status of Women is over for me - the meetings do continue though for one more week in New York. I'll be following, particularly the ongoing negotiations of the Agreed Conclusions. These are very important, and reaffirm the pledges of the governments of the world, and actions to take, on eliminating violence against women and girls. To  NOT have an Agreement would be a unacceptable. But possible, given there was no agreement last year.

Some of what i did this last week: attended 3 Briefings; the NGO all day Forum, where we heard remarkable women like Michelle Bachelet (Executive Director UN Women); Bineto Diop (Chair, Femmes Africanins Solidarite) and Tawakkel Karman (Nobel Prize Laureate). There was a panel on Trafficking of Women and Girls at the NGO Forum, and later a Panel on the Role of Men. The Panel on Best Practices rounded off the presentations, and all in all, the NGO Forum did give a good introduction to many of the themes that would later be heard at the meetings and presentations during the days ahead. But the best part of the NGO forum is connecting with friends, and making new friends and allies. There were over 700 at the NGO Forum. Big complaint - no lunch was provided, althought the charge to attend was over $100. Always, this event has included lunch. It was hard to understand why even a bag lunch couldn't have been provided this year.

During the week, as you can see on the Blog, there were excellent side events, and even better, in my mind parallel events. The difference is that Side Events, are sponsored by Countries/Missions/UN Agencies, and Parallel Events are sponsored by NGOs. You really hear what is going on from the grass roots, like the women from Egypt, or the women from West Africa.

The NCWC delegates, Louise Riendeau, Rosemary Mallory, Nazila Isgandarova and myself attended many workshops, and the various reports from them will be posted. Pictures will be added to the slide show, which has well over 100 now. We also supported the International Council of Women events. I was at the Sunday Reception, and the Celebration for the 125th Anniversary of ICW at the Romanian Mission. It was good to see the connection with many from around the world and the feeling that women working together can change the world. i had a wonderful roommate Nayyar Javid, who was part part of the CRIAW delegation. it was good to work with other Canadian NGOs, like CFUW.

Attended:
3 Briefings
3 Receptions (Canada, and ICW)
1 Meeting with Canadian Mission (with Voice of Women for Peace)
1 Speicial event - Human Security: The Missing Link between Women's Rights, Conflict and Peace
2 Side Events
The Opening of the 57th CSW (in the General Assembly)
7 Parallel Events
and Moderated the NCWC parallel event, Who Interprets the Sacred Text?

So exhausted and yet somehow refreshed, and looking forward to continuing our work back home.