Role of women in building peace.

Mavic, should women human work with counter terrorism. Introduce network. Maintenance services, national action network 1325 and relatedresolutions.  advocate for women engaging in the proces, but right women. Advocate for women to participle in formal negotiation.formal peace negotiation, framed by the states. Example phillipines, groups to be taken out of the list,peace talks stalled, example from Columbia. Happy groups having discussion also concerned about  definition,
Catherine Harrington from WLP, 20 independent representatives. Looking at root causes. Hunan security talking about, even before 9:11, re emphasizing human security as the approach. Examples, what is the definition, is it security during war,or is it during peace. All phases of security. Need to have a voice on all these issues. Couple of examples, northern Nigeria, unstable. Relations with women victimized, implement training sessions, young women, mentored. Many working on food security, related different issues, but cross cutting.look for action, try and take human security approach. Start to talk about human security, not just military approach, holistic approach.
Robert, journalist, community dev. Approach. Kenya, say no to violence and terrorism. Use music and dance. Women demonstrating against terrorism, condemning terrorism in Kenya, guys recruited and taken to Somalia. Numbers, without any support. Omen have proven to be strong.povert led to powerless ness. How do you make decision, to join terrorist organization.because of poverty accept son going into military.  Your mom doing the wrong thing, you have to join. 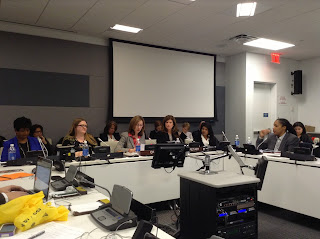 Questions, women working together, every organization patriarchal ,an organization of power.
Legitimate speech being seen as terrorism, wo,en should not be involved. Military manufacturers,rofiling in USA. Human security handle the budget, debunk connection human security and high security. 2012 military manuf from security council.
Non violent responses to deal with conflict. Training in non violent means. Men standing for rights, but not use violence.
Counter terrorism human rights framework rather than human security. Need to address root causes of conflict. Grass roots women defining security.
Can't have security without recommending at broader context, both human rights ans human security important, Un needs to distinguish it self about terrorism, if Un serious about terrorism needs to take a seperate approach, human rights approach, great progress. Have to be stronger unacceptable, pit human rights at the core,has to be centred on causes, interest if that is basis for dialogue. Conditions conducive to terrorism.  Un has to work get the support of civil society.
Willingness to work with civil society in an equal partnership. Women in positions women in security sector. India sent all women's unit,incr,ease of reporting, and interstate in all women unit in Liberia.b